What is an electric skid steer? 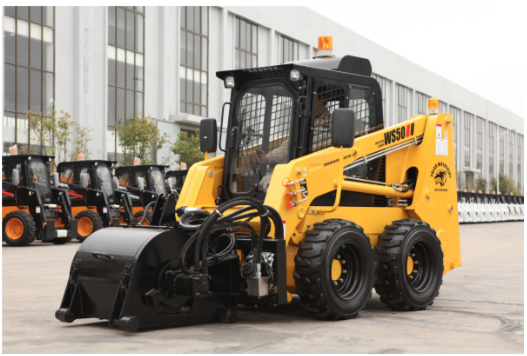 A skid steer, also known as a skid loader or wheel loader, is a versatile type of construction machinery used mostly for digging. It's easy to move around the construction site and landscape, and its arms can be fitted with a variety of tools. Four wheels or two tracks will be available for the skid steer loader. The wheels stay locked in place in a perfectly straight line. As the device turns in the other direction, the skid steer operator increases the speed of the wheels on one side, causing the wheels to skid or drag across the ground. The machine is named from its ability to steer.

A few benefits of each size class are as follows: 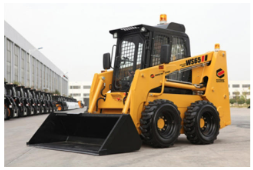 A skid steer loader with a compact frame is a good option for precise work in landscaping and other similar fields, as well as for demolition in confined places and underground construction. Lighter and more compact, smaller skid steer loaders are less of a hassle to move to and from the job site. 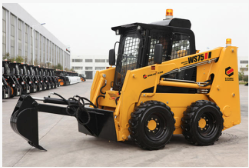 A mid-sized skid steer loader, while still compact and lightweight, has more engine power and carrying capacity than a smaller skid steer. These skid steers, when fitted with the proper attachments, can serve as a reliable substitute for heavier machinery like backhoes in confined spaces. 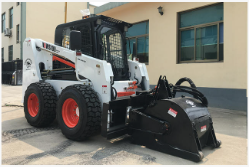 Heavy-duty tasks, such as extensive demolition, excavation, or road construction, are best handled by huge skid steers. While a giant skid steer is still more manageable than some of the other more typical construction machinery, it is more cumbersome to transport and less adept at working in confined locations than a standard-sized skid steer.

Like the palette of a forklift, they are primarily used for lifting, stacking, and transporting goods. A skid steer's fork is removable, unlike a forklift's, so you may use it with other attachments for rapid lifts that don't necessitate a dedicated forklift.

Buckets work better than shovels for scooping soil and rocks. Simple buckets like this are cheap, common, and simple to swap out. Buckets can range from those designed to carry fragile objects to those used to pour cement. You should be able to locate at least one that works for you.

Another common skid loader attachment, augers have a more specialized use and are known for their efficiency and power. Due to their long, slender form and strong teeth, they can dig exceptionally deep holes in the ground with relatively little disturbance to the surrounding area.

Landscapers can benefit greatly from rake attachments because of their ability to efficiently collect rocks and sticks without requiring additional labor. In addition to this, they can compact microscopic particles, aerate the soil, and level the ground. While rakes aren't essential for every job, they can be incredibly helpful in landscaping and soil grading.

Use a backhoe attachment to dig the hole. It can pick things up and carry them, as well as grapple, dig, and scoop. It's easy to confuse this with a bucket, however the backhoe's bucket is attached to a single cylinder instead of a double boom.

Trencher attachments are made specifically for the laborious task of digging trenches, as their name implies. Usually, digging a trench requires a lot of time and effort from a lot of people. Furthermore, it is far more capable of tearing through rocky, hard dirt than any human being.

You should always have a tiller attachment on hand when dealing with dirt. It loosens soil by grinding through rocks and clumps. This attachment can also be used to include amendments like compost and other soil amendments. Using a tiller isn't necessary for every job, but it does make short work of dirt.

When dealing with dense undergrowth, nothing beats a brush cutter, also known as a brush hog or stump grinder. This cutter is so powerful that it can even fell small trees. Typically, this attachment is placed on skid loaders and sent to a job site to clean it up before additional machines are brought in. To be clear, brush hogs are not invincible. They excel at slicing through vegetation less than 60 inches in thickness.

Since the primary function of a rock breaker attachment is to break apart extremely hard materials like concrete or asphalt, these are the only two common substrates for its application. You'll need a skid steer with sufficient hydraulic power because they get their power from the skid steer's hydraulics.

When dealing with large pieces of trash, grapples (or grapple buckets) can be a huge help. As opposed to a standard bucket, grapples feature two arms that can grab onto whatever you're trying to move. Their inclusion to a fleet is highly recommended.

What are electric skid steers used for?

Skid steers are useful for many different kinds of work. Some tasks that are easier to complete with the aid of a skid steer include:

Skid steers are versatile and useful for both indoor and outdoor demolition work. Your skid steer may assist in the destruction of flooring, concrete, drywall, and other materials with the use of demolition shears.

Skid steers are versatile machines that can be used for paving and repairing roads. Among the many useful attachments for a skid steer are a cement mixer and a pavement miller.

The skid steer's bucket can be used to remove snow and other obstacles, such as bushes. If you plan on using your skid steer for extensive snow removal, you may want to invest in a snowblower or snow blade attachment.

Earthmoving jobs, such as digging, trenching, and excavating, are perfect for a skid steer. Any of several different attachments can be used for these jobs, so you can choose the one that best suits your requirements.

A skid steer can be used to aerate the ground, level the ground, and fill in holes. To accomplish these goals, you can use a bucket, but for more precise leveling, you might consider investing in a rake attachment or a grading bar.

By attaching a bucket to the front of the skid steer, you may move heavy objects about the construction site with ease.

It's possible that you didn't know that a skid steer can be used as a mower. In order to quickly and effectively clear an area of tall grasses and other plants, a rotary brush cutter can be used.

Grinding stumps, chipping wood, and tilling are a few more landscaping activities that may be done with a skid steer. Compost and fertilizer can be worked into the soil with the help of a tiller attachment.

Towable loaders, or "skid steers," can be extremely helpful on the farm. They are useful for tilling, as well as the other activities we listed. In addition, a bucket attachment makes it easy to wipe out stables and barns.

Choosing a skid steer with a vertical lift instead of a radial lift is the best option if you plan to use it to move products up and down aisles in a warehouse.