Inquire Now
You are here: Home » News » Skid Steer Loader： Everything You Need To Know

Skid Steer Loader： Everything You Need To Know

What Is Skid Steer Loader?

A skid steer is a small, versatile piece of construction equipment used primarily for digging. It’s light and manoeuvrable, and its arms can attach to a range of tools for various construction and landscaping jobs. 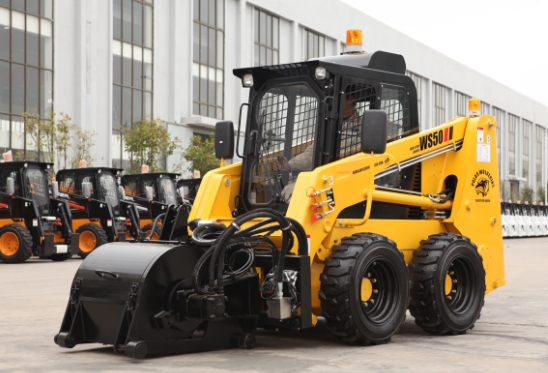 Different kinds of attachments help to diversify the capabilities of the equipment. For spring, summer, winter, or fall, it can help increase productivity and add a level of efficiency in all kinds of project types.

2. What Are Skid Steer Loader For?

Skid steer loaders are still designed for jobs that require both power and excellent manoeuvrability in tight spaces. By using different attachments, SSLs can be used for all kinds of applications. Skid steer loaders work best on jobs that require pushing or lifting as opposed to pulling or digging. They are regularly used in construction, landscaping, agriculture, demolition, forestry, and more.

3. How Does Skid Steer Loader Work?

The design of the skid-steer loader was initially criticized because it was believed to be less safe than its predecessor: the conventional front loader. While it's true that the early models of skid-loaders were designed in such a way that the operator was more susceptible to the dangers of moving booms, modern innovations and safety precautions have eliminated these concerns. Indeed, skid steers work in a way that is not only physically secure and reliable but mechanically innovative and impressive. When operating a skid steer, the driver turns the machine through a process called differential steering. This means that the left and right wheels rotate and pivot independently of one another, so you can make an acute turn on one side or the other without the risk of tipping over or compromising the load of the lift arms. The lift-arm assembly itself can be modified with different attachments to accommodate various jobs and weight loads. Hydraulic couplers are usually found at this attachment point.

Skid steers come with either four wheels or two tracks. The front and back axles of each are locked so they move at the same time; however, they can be operated separately. The name "skid steer" comes from the fact that to turn this piece of heavy equipment, you have to increase the speed of the wheels on the opposite side of the direction you want to go, which causes the skid steer to skid as it turns. The inside wheels anchor the turn. Once the heavy machine is turned, you can return to your operating speed. Wagner Used Equipment Co recommends that if you watch skid steers on job sites, it can seem like the machine jerks on turns.

4. What Sites Can Use the Skid Steer Loader?

5. How to Choose Skid Steer Loader?

The skid steer loader has a wide range of models to choose from, the key to choosing equipment is to choose the most in line with your work needs. The Skid Steer Loader is a good place to consider when you are choosing a device that requires a lot of work and that is easy and fast to operate.

Knowing What to Consider When Choosing A Skid Steer Loader