Inquire Now
You are here: Home » News » Things you didn't know about a skid steer loader

Things you didn't know about a skid steer loader

Today's skid steer loaders offer compactness, ease of control, power, a small turning radius and, most importantly, the ability to be used with a wide variety of attachments, making them available for a wide range of tasks. 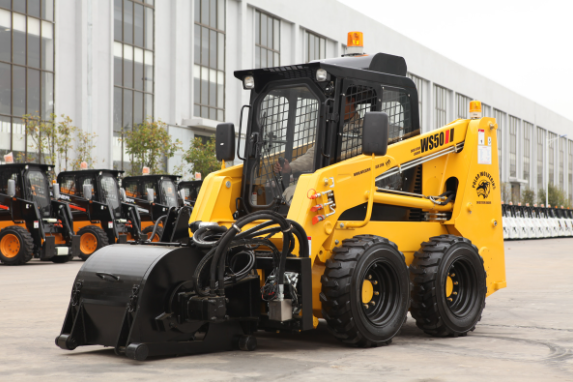 From moving materials to digging holes, from light dozing to trenching, from mowing to lifting; skid steer loaders are incredibly versatile.

But did you know that it can also be used for road construction and snow clearing? In this article, we'll introduce several more unusual uses for skid steer loaders.

You may be wondering, how big of a skid steer loader will I need? Well, the answer lies in your planned use. Below are several advantages for each size group.

You are probably going to choose a smaller skid steer loader if you want to use it to work in tight spaces, such as inside demolition or underground construction, or for sophisticated work such as landscaping.

The smaller skid steer loaders are lighter, thus they are easier to transport to and manoeuvre during the job. Ti-han 0.75Ton Skid Steer Loader is an ideal choice for a small-sized skid steer loader.

Armed with proper attachments, these skid steer loaders can be a useful tool for digging in tight spaces where larger equipment won't fit. For example, there are several products you can choose from:

What Can A Skid Steer Loader Do?

Because of their compact size and precision, skid steer loaders are especially effective for demolition projects in tight spaces, for example when you're tearing down homes in neighbourhoods where there are other homes nearby.

For road construction, skid steer loaders will be a must. It can do road grading, move dirt around, load it into trucks and carry it away. And it performs demolition work on existing roads or digs out holes.

When finished, using the broom attachment, it can clear up any road dirt and debris left behind. From material removal to material pushing, skid steer loaders are essential for road clearing and maintenance.

Unlike pickup trucks, they can lift and load snow and carry it to dumping sites if needed. With good traction in the snow and a comfortable heated cab, they are very efficient to use as a snowplough when fitted with an attachment shovel and bucket.

Skid steer loaders are beneficial for earthmoving jobs such as excavating, trenching and digging. Based on your specific needs, you can use a wide range of attachments for these jobs.

A few examples include backhoes, augers, trenchers and wheel saws. with the proper attachments, a skid steer loader can dig anything from the entire foundation of a building to a narrow hole.

You can also use a skid steer loader to fill in pits, grade the ground and aerate the ground. You can use a forklift for these tasks, but a rake attachment or levelling bar will work better when grading the ground.

Having these attachments also allows you to scoop up rocks while levelling the ground without leaving large trenches. For jobs that are lower to the ground, instead of a vertical lift, you can use a radial lift skid steer loader.

It can even cut down some small trees. Since skid steer loaders are zero-turn, they provide the mowing precision you need, but at the same time have more capability than a typical riding mower.

We've mentioned above some of the roles that a skid steer loader can play in regard to landscaping jobs. Examples of other landscaping jobs you can do with it are stump grinding, wood chipping and tilling.

A tillage attachment can be used to help mix compost or fertilizer into the soil. Having a bucket allows you to transport materials such as gravel or mulch as well as landscaping tools that you otherwise will have to push with a wheelbarrow.

If you invest in a skid steer loader, you will be able to accomplish many tasks that were previously impossible or would have taken more time to complete. Skid steer loaders are easy to operate, are relatively small so that storage space requirements are not high, and can be easily transported from one site to another.

They are manoeuvrable, compact in size, powerful and functional which makes them a must-have for anyone engaged in lifting heavy loads or doing heavy work. The small turning radius of these heavy machines makes them ideal for use in tight spaces.

Shaoxing Ti-han Heavy Industry is one of the best skid steer loader manufacturers and suppliers,  the skid steer loaders we produce are made from the best components and will keep on going for decades if maintained correctly.